skip to main | skip to sidebar

The new CBR is due for its first oil change. (@ 600 miles) Being the good, modern guy that I am, I looked online and ordered what Amazon said the Bosch equivalent was. A couple days later, it arrived, I opened the box and thought: "Gee, this seems bigger than the stock one..." Then, I put it down and went about my life for the next couple days.

I got out to the garage, removed the original filter, drained the oil, and reached for the Bosch. It's about the same diameter and seems to have the same threads, but it's probably 40% longer than OEM. Won't fit, due to interfering with the exhaust pipes coming out of the cylinder head. Damn.

At this point I was still too busy to get out to a Honda shop. So I looked up a charge of equivalent oil filters from an old post on the cbr500riders.com forum. It cited a couple of Wix filters that would fit. I thought this would be more reliable than Amazon's recommendation, as it was posted by a CBR500 rider. Alas, that one came a couple days later, and it is longer AND wider than the factory one. Damn-damn!

I thought about taking a trip to the Honda stealership at lunchtime today, but it's in a bad traffic area and it's under construction and it's Friday. It'd take my whole lunch hour to get it done.

I'm a glutton for punishment, so I looked up another one on Amazon, the HifloFiltro HF-204. From the pic, it looks to be the right size. The manufacturer says it is a replacement for the OEM one. The specs are also impressive, as they specifically cite quality components and 3rd party TÜV certification. I paid extra for next-day deliver, so we'll see how she fits tonight.

I've added some soft luggage to the CBR to make it touring-capable. Here are a couple of quick YouTube videos on them:

Well dudes and dudettes, (being optimistic there ^_^ )

Today, I traded in my trusty Silver Wing; the second one in 3 years. I told myself I'd never sell this one. Maxi-scooters are so good at so many things, and are just PERFECT in the suburbs. They tour pretty well, do interstate pretty well, and handle small grocery runs and rush hour well too. They are a ton of fun in the twisties, as I can focus on the lines and having the perfect throttle input without any need to shift. They have a very low center of gravity, so they're quite easy to handle, despite their prodigious mass.

I test drove a Honda CBR250R yesterday. Great little bike, but it did get buzzy past 60 mph. I don't think the single cylinder was a wise design choice by Honda, but a cost-saving, margin-boosting one instead. It is amazingly powerful under 60 mph. Lots of fun to shift through the gears like a MotoGP hero, but then look down and see I'm only going 40 mph. Had I been on my old FJR, I'd have been going well over 100 mph with that much revving and shifting.

I skipped the latest generation of 300c single cylinder Hondas, as I hear they're just too buzzy, from being stroked out.

Then, I test-rode what I thought was a used CBR500R. Fell in love with it. It seemed like the perfect bike for me. Quick enough in acceleration to be really fun, but not so fast in speed that I'd have to be so darned careful, as I was on the FJR. Turns out it was a new, left-over 2017 and too rich for my blood.

That stealership wanted to rob me, so I said no thanks and made an 80 mile ride up to a dealer north of Milwaukee. They had a new, left-over 2015 CBR500R ABS for $1820 less than the 2017 at the local dealer. ABS is a feature I can really stand in support of, since my crash locking up the front brake of my Buddy 125 when I panic-braked for a deer caught in the headlight back in about 2011.

The ride up north of Milwaukee was over 90% interstate expressway, and in my neck of the woods, that means a lot of truck traffic. I was reminded of how badly maxi-scooters get buffeted by the turbulent air coming off the backs of the trucks. It seems to be the only chink in the armor. Oh, that and they CAN be a bit dull to ride sometimes, compared to a classical motorcycle. But that beauty had NO problem cruising at an indicated 85 mph at just over 6,000 RPM. (actual, probably 77 mph) I know I'm going to miss the huge locking storage, but then again, this is not really a "run to the grocery store" type of bike. Gonna have to do that on my bicycle, now.

They gave me a fair deal on the Silver Wing. $2500, in light of it having some paint issues from the previous owner dropping it, and needing new tires. (original ones were starting to show some age cracking)

The ride home... woo, I forgot how different a sporty motorcycle is than an upright scooter. Buffeting was not an issue at all. Hitting bad frost heaves on the freeway were jarring, as they always are, but since I then had my weight split between my wrists and back, it was overall easier on my body. I DO need to get a taller windshield for it, as my ears were ringing when I got off the bike, even though I wore ear plugs. The air coming off the windscreen of the CBR was cleaner and smoother than that of the Silver Wing. The Silver Wing's screen blocked almost all of the direct wind from the body and neck, by my helmet took some ferocious turbulent air of its top. I have a Givi Airflow windshield in the garage I meant to install, but never got around to. Shoulders took some air too, which I wasn't used to. Froze my butt off, as I was only wearing a long sleeve shirt and my mesh jacket with windproof liner. No insulation at all.

The CBR feels a lot quicker, despite being down about 110cc on the 'Wing. Must be those extra 128 pounds it was carrying around. That, or the 'Wing is quicker than I give it credit for, since one is ALWAYS in the right gear and there's no pauses for shifting.

Now to deal with plate transfer and insurance... 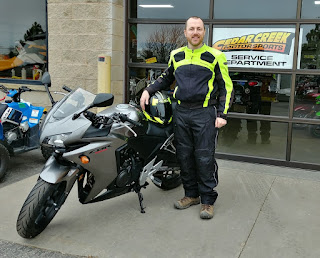 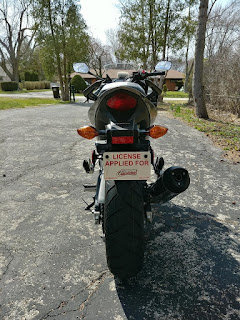 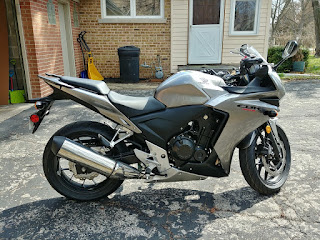 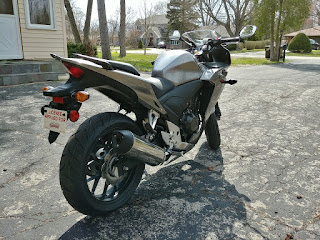 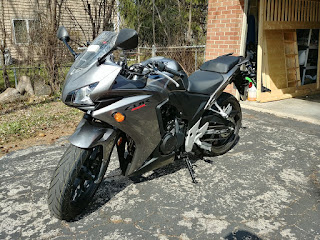 Late entry: I took a road trip with my family from my home in the Chicago suburbs down to the Smokies. It was in my car, an Accord EX with a manual transmission. It was fun, but I kept thinking: "Man, these roads would be AWESOME on the Silver Wing, I need to get back down here on it."

So I took a break from real life and made it happen.

Home base was Gatlinburg, TN, which is now just a tourist trap. But there are lots of places to stay, and it is right in the foothills of the Smokies. Here are my favorite pix from the trip: 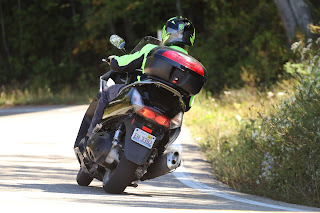 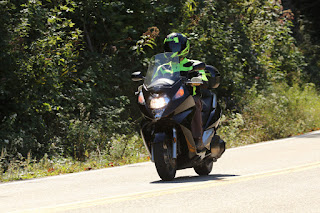 Ready to hit the road: 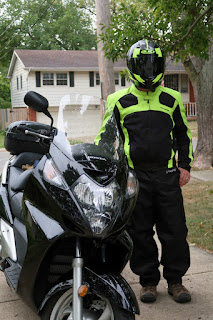 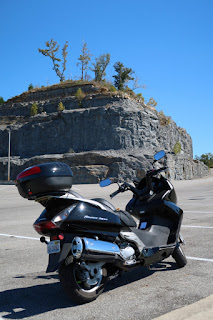 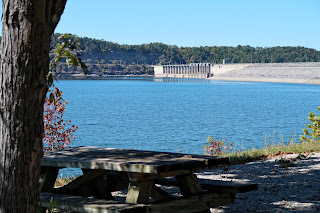 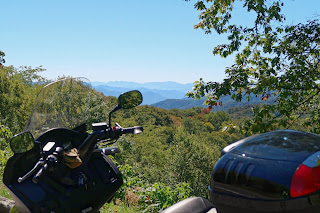 This is why they're called the Smoky Mountains: 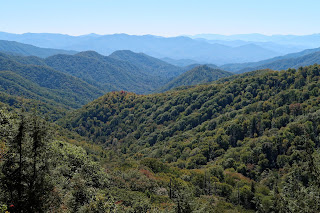 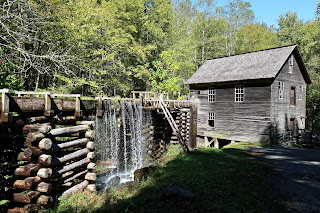 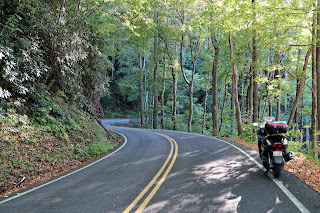 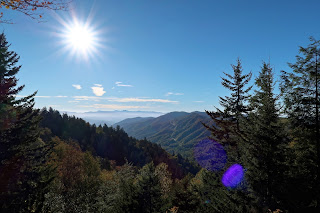 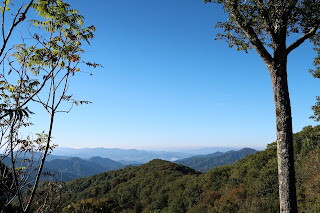 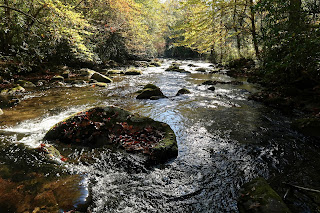 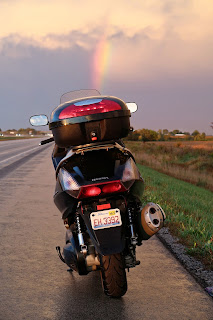 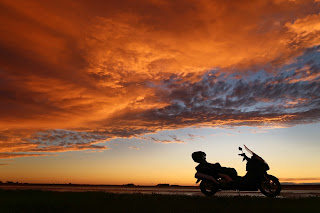 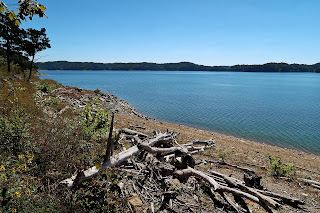 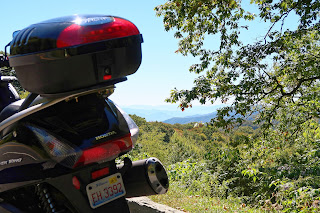 Just coming back to here after a long hiatus, I'm back into riding. I've been riding a Honda Silver Wing on and off for the past few years. It seems to be the perfect bike for me. Allow me to recount its virtues:


I had a wine red '06 Silver Wing a few years ago, but found I didn't have much time to ride. Foolishly sold it. Went a year without a motorized bike, and last year, I bought another one, this time a 2012 model with ABS.

Here are a few photos to get the blog going again. 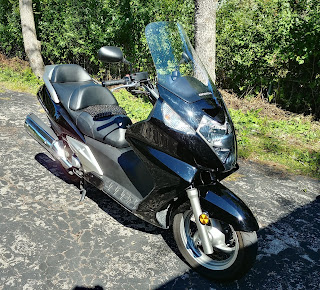 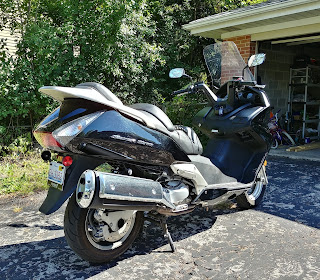 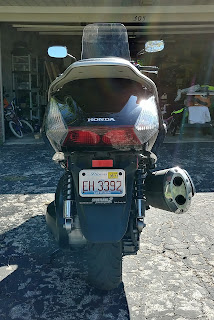 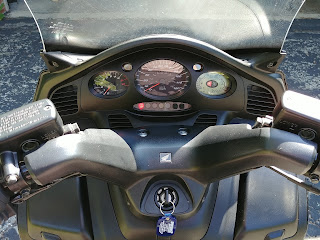 A Change of the blog's subject

I've sworn off motorcycling for the time being, since the crash in Nov. 2009.

So I think I'm going to re-focus the blog on cycling.

What has happened in the past couple years? I sold the motorcycles and used the proceeds to buy a nice bicycle, a Specialized TriCross Sport in 2010. This is the long range bike that can also take a knock or two without breaking on me.

I also picked up an urban bike, a Gary Fisher Simple City 3-spd, which was stolen from the train station near where I work. I miss that bike, so I recently replaced it with a Schwinn Coffee 3-spd. I now use this for the home-end of my multi-mode commute. 1.8 miles each way. Not a huge distance, but enough to get some exercise and fresh air.

More on these bikes, including photos in the future. Posting pictures with this blog software and getting them to appear at the right place in the post has been a real pain. I'm going to try the new interface pretty soon. I hope it works with Chrome from a Mac...
Posted by Jeremy Z at 12:29 PM No comments:

Well fellas, I crashed my KLR Nov. 22, 2009. It was my fault. Went into a turn too fast. Leaned over to try to make it. Scraped pegs. Wasn't making it still. Leaned over further. Lifted the rear wheel off the ground. Low-sided, and caught the toe of my right foot on the ground. It twisted my leg and broke it in three places; spiral fracture.
Then, I went for a nice flight into the woods. My buddies took good care of me. Called my wife and the ambulance.
It has been a pretty bad couple of months since then. Two more weeks and I can start putting weight on it again. I've been on crutches ever since. (it will have been three months) I now have a metal plate that goes from my ankle to just below my knee.
This was a right turn. I'm damned lucky there was not an oncoming vehicle, or it would have been lights-out for me.
We haven't had kids yet, so I think I'll hang up my gloves, fix and sell the bikes, and maybe consider a Miata some day when we can afford it. I left the door open to resume riding when our kids are grown.
Have fun everyone, and try to keep the rubber side down. It seems to be more fun that way. ;)
-Jeremy
Posted by Jeremy Z at 11:09 PM 6 comments:

Usually, I pack it up when it starts to get to 40°F and below. As I type this, it is hovering right around 40. This year, however, I didn't do as much riding as I would have liked. I rode my scooter quite a bit, but hardly rode a motorcycle at all until I traded the FJR for the KLR. Now, I'm enjoying riding more, but the KLR's wind & weather protection is lacking when compared to the FJR's.

So, I just placed an order at motorcyclesuperstore.com for a set of boots, cold weather gloves, and a windproof balaclava.

I've never had a proper set of cold weather riding gloves. In the past, I have made do with Gore-Tex ski gloves. They don't allow good enough finger & thumb articulation for motorcycle riding though. I'm hoping these are better, as they're motorcycle-specific. Here's to hoping!

I already have a set of Oxtar Matrix boots with the Gore-Tex liner. However, I bought them in size 42, which fits perfectly with thin socks. Unfortunately, cold weather riding is better done with warmer, slightly thicker socks. So these, I ordered in US Size 10 (Euro 43) and will hopefully have room for warmer socks. I also felt like it was overkill for the boots to go up so high. (these are only 3/4 height) If I'm wearing my riding pants, I'm not as worried about getting hit in the shins by rocks as I would otherwise. I think I will enjoy the better ankle flexibilty.

I'm hoping to get another month of riding in before the snow flies.
Posted by Jeremy Z at 9:46 AM 1 comment: